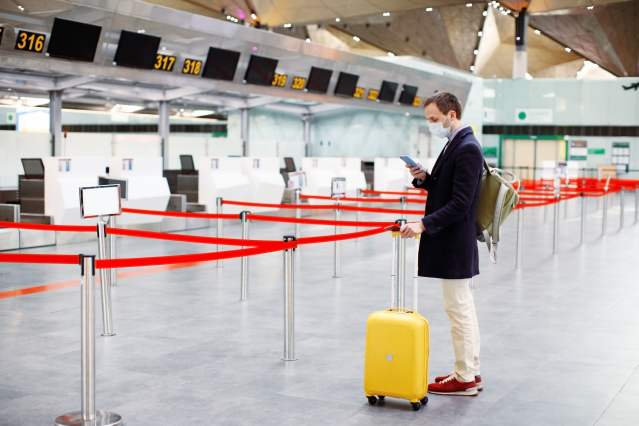 The French government suspended the online portal through which visitors from outside the EU (except the UK) could request a health card QR code.

This means that they must now complete the process at a designated French pharmacy, at a cost of up to â‚¬ 36.

Tourists arriving in France from abroad must obtain a health pass to be able to visit public spaces such as restaurants, bars and museums.

This pass sanitary may consist of proof of being fully vaccinated against Covid, a negative test result received within the past 48 hours, or proof of recovery from Covid within the past six months, and is normally presented via a QR code generated by the French application TousAntiCovid.

Visitors from the EU and some countries including the UK have vaccination certificates that are already compatible with the app and can be downloaded directly.

However, many non-European tourists, including those from the United States and Canada, do not have documents that can be scanned in TousAntiCovid, so they have to go through a process of converting their certificates.

These travelers were first informed that they could translate their documentation into a QR code by sending an email to the French Ministry of Foreign Affairs.

On August 27, an allegedly simpler online portal was launched, allowing tourists to upload their contact details themselves.

However, the ministry received “a huge number of requests” – over 4.5 million according to The Points Guy – causing processing delays and leading some travelers to cancel their trips.

Read more: “I canceled my trip”: French health passport delays hit tourists from outside the EU

Foreign students arriving in France and French people vaccinated abroad can however still apply through their respective portals.

The United States Embassy in France has just issued a statement explaining that: â€œSince October 31, the French government has changed the method by which American citizens and other people vaccinated outside the European Union can obtain a passport. French sanitary.

“In the new system, the health pass will be obtained from designated pharmacies for an amount of up to â‚¬ 36.”

Read more: French pharmacies will convert vaccination data outside the EU into a health card

The Embassy also provides a list of pharmacies that will agree to perform the procedure for tourists.

Travelers will need their passport and the original paper version of their vaccination record – containing their name, date of birth, date (s) of vaccination, number of doses and the country in which they were received – in order to get the QR code.

Those who are not vaccinated or are unable to convert their vaccination records can also obtain a health pass by taking an antigen test at a pharmacy, many of which accept walk-in visits.

These tests generally cost between 20 and 30 â‚¬ and the results are accompanied by a QR code that can be used as a health pass for the next 72 hours.

“This is strictly a procedure of the French government,” added the US embassy. “Despite what some pharmacies have told travelers, the US Embassy does not have access to the French system, and neither can we help with this process.”

It’s unclear when the decision to suspend the online portal was made, and French embassies in countries like Chile and the United States still say travelers can request a QR code online, though the links no longer work.

The website of the French Embassy in Washington DC states that â€œthe system is open to non-European foreign nationals, tourists and students. […arriving] before September 5.

â€œRequests for subsequent arrivals will be dealt with at a later date. ”

However, that does not explain why the system remained active until October 31.

The connection contacted the French Foreign Ministry to ask why the portal was closed and whether there are plans to introduce a new online system. We have not yet received a response.

Some U.S. tourists have said they can visit restaurants and museums using their Centers for Disease Control and Prevention (CDC) vaccination cards, but this is at the discretion of the location.

Do I need a Covid health control form to drive from France to Spain?