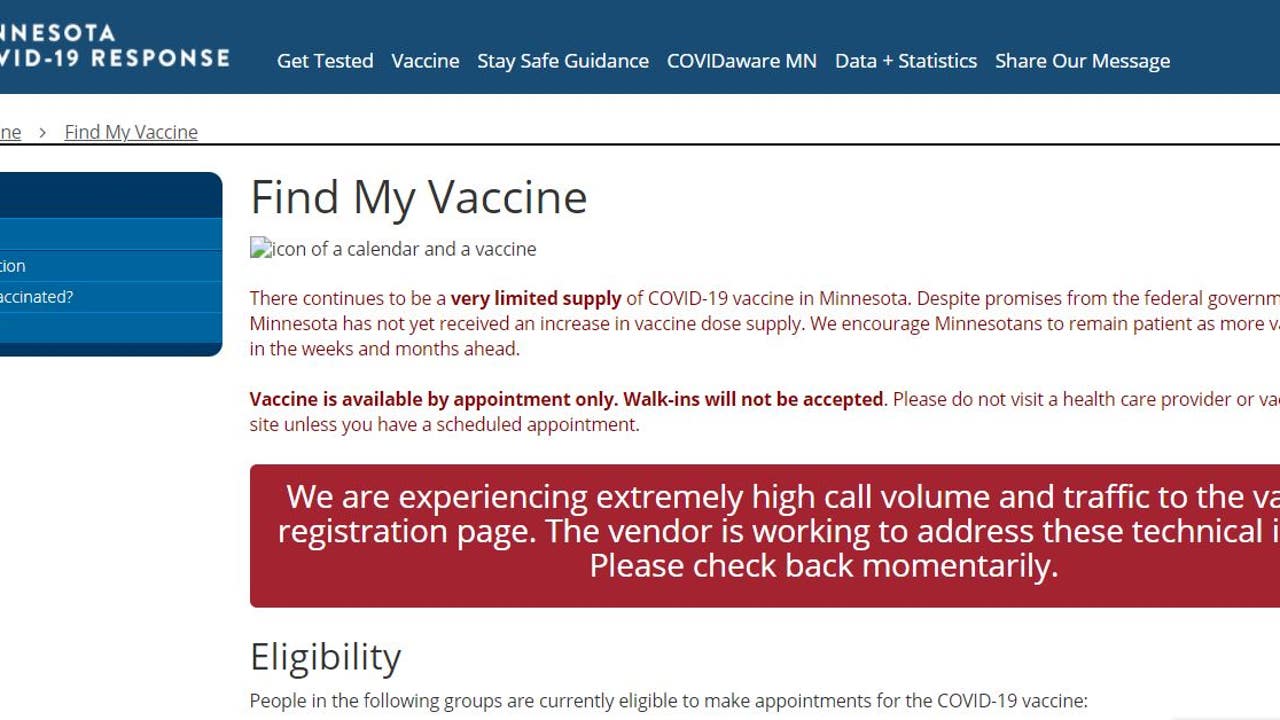 (FOX 9) – Seniors in Minnesota rushed to the state’s online portal to schedule COVID-19 vaccination appointments for Tuesday afternoon, causing the website to crash and calls to be dropped.

By 4 p.m. 5,000 people aged 65 and over had been booked for appointments and many more had been placed on a waiting list. State officials said their supplier, Primary Bio, was not prepared for the extremely high traffic, but planned to stay with the company for future listing periods.

Seniors in Minnesota rushed to the state’s online portal to schedule COVID-19 vaccination appointments for Tuesday afternoon, causing the website to crash and calls to be dropped.

“While our provider assured us that they were ready for extremely high traffic today, that traffic clearly exceeded expectations,” Tarek Tomes, state IT commissioner, told reporters at a conference telephone. “We will work with them to apply what we learned today to make the system work for the long term.”

The portal went live at 12 noon and was immediately overloaded. People received error messages when they dialed two numbers provided by the health service. Online, many got stuck in a virtual waiting room before the website temporarily crashed.

Minnesota’s COVID-19 vaccine online appointment portal was overloaded on day one, but officials said they were working with developers to resolve the issue.

State officials said the problem was not with the state server but with Primary Bio. Health officials said they never stopped making appointments. This week, 6,000 slots were made available to people aged 65 and over.

State officials said the problem was not with the state server but with Primary Bio. Health officials said they never stopped making appointments but shut down the system to new users. This week, 6,000 slots were made available to people aged 65 and over.

The registration window opened on Tuesday for appointments on Thursday, Friday and Saturday.

â€œI don’t think it would be fair to characterize this as the result of the rush,â€ Kris Ehresmann, the state’s director of infectious diseases, said of registration issues. “I think this is the result of an incredible pent-up demand for vaccines and an incredibly limited supply.”

Burnsville’s Sandy Hendrikson estimated she called 100 times in over an hour on Tuesday afternoon before giving up.

â€œI tried for about an hour and then I thought, that’s enough,â€ Hendrikson said in an interview. “I just want to be done. But at least I’m not sick, so I’m counting my blessings.”

Others enlisted their children to call on separate phone lines in hopes of flooding the system. It worked for Mel and Carol Tollefson from Bloomington, who made an appointment for Thursday afternoon.

â€œIt’s like we won the lottery, because I know all these other people trying, even good friends of ours, have tried and tried with no success,â€ Mel Tollefson said in an interview.

State Senator Karin Housley, who chairs the Senate Committee on Aging, criticized the deployment and said Minnesota should prioritize its oldest residents as deaths and hospitalizations disproportionately hit this population.

Housley, R-St. Marys Point said she had little confidence the issues would be resolved by next Tuesday’s registration window.

“I can guarantee you that next week Tuesday the website will be down, the phone lines will all be backed up. This is not the right system. We already have clinics in place that are ready to do this,” he said. Housley said in an interview. .

As of Tuesday, 200,130 people received at least one dose in Minnesota and 38,025 received both doses. The figures are as of Friday due to a three-day lag in the reports.

Minnesota is opening nine pilot vaccination sites across the state this week that will begin administering vaccines to people 65 and older, as well as teachers and educators.

Employers will notify teachers and educators if they have been selected to receive an immunization appointment, but people 65 and over could go online starting Tuesday at noon to make an appointment to receive their vaccination. vaccine at one of the nine pilot sites.