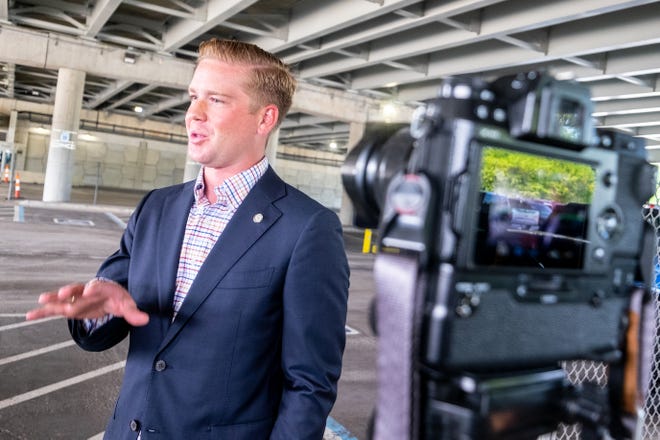 HB 5288, sent to the entire House by the House Elections and Ethics Committee, after a 5-2 vote, forces voters looking for mail-in ballots to physically sign their requests and prohibits the use of digital or electronic signatures.

The bill, sponsored by Representative Andrew Beeler R-Fort Gratiot, would bar the secretary of state and local election officials from providing an online mail-in vote request that does not require a physical signature. The online application now available on the State Department’s website allows for a digital signature, provided certain other identifying information is provided.

Gov. Gretchen Whitmer, a Democrat, has vowed to veto the legislation if it is approved by the Republican-controlled legislature. Whitmer vetoed four more election bills on Sunday, saying they “would have perpetuated the big lie” – that the November 2020 election was stolen – “or made it harder for the Michiganders to vote.”

The Michigan Secretary of State’s office currently provides an online application for postal voting, using a digital signature. Applicants must provide their full name, driver’s license or state ID number, date of birth, eye color as printed on the license or state ID, and the last four digits of their social security number.

A spokeswoman for Secretary of State Jocelyn Benson, a Democrat, did not immediately comment.

In written testimony, a coalition of groups called Promote the Vote said more than 4,500 Michigan voters have already used the state’s online app to request postal ballots for the November 2021 election.

â€œMaking it more difficult for registered voters to exercise their constitutional right to vote by mail is analogous to locking the door of the polling station on election day,â€ the group said in written testimony. “Its real purpose is to deprive voters of the right to vote.”

State Representative Ann Bollin R-Brighton, chair of the committee, said legislation is important to help clerks verify the signature. If electronic signatures are used, clerks “have nothing to match,” Bollin said.

The legislation is “not politically motivated,” Bollin said. “I want to promote good policy.”

As approved by the committee, the bill would allow voters to request ballots by mail by email and fax, in addition to the in-person and regular mail options now available.

The committee also passed an alternate version of a bill that prohibits the Secretary of State from sending unsolicited postal ballot requests to voters, as Benson did for the recent election.

But the bill was not voted and remains in committee.

In 2020, the Michigan State Department set aside $ 4.2 million in federal funding to support the mailing of postal ballot requests to each of Michigan’s 7.7 million registered voters, at a rate of approximately 55 cents per shipment.