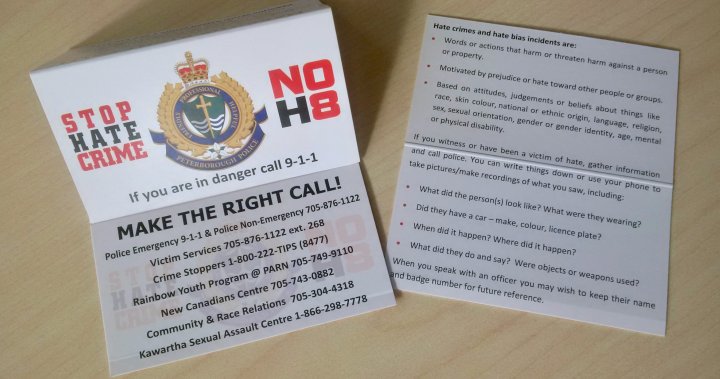 The Peterborough Police Department has created an online form for residents to report incidents of hate bias.

According to police, a hate bias incident is behavior that is not a criminal act but is motivated by prejudice against an individual or group based on racial, religious, ethnic or sexual orientation, as well as disability, etc

It becomes a criminal act (hate crime) if they directly incite others to commit violence against individuals or groups or walk around them out of fear for their safety, police said.

Police say the online option is a way to reduce barriers to reporting.

The story continues under the ad

“Hate of any kind is intolerable,” acting police chief Tim Farquharson said. “The hope is that reducing barriers to reporting such incidents will lead to more accurate reporting and a better understanding of incidents in our community so that resources can be directed accordingly.”

2:09
The CMA of Peterborough had the highest rate of police-reported hate crimes per capita in Canada

“Police can help de-escalate potentially dangerous situations and prevent hate-motivated criminal behavior by accurately responding to and documenting hate-motivated speech or behavior, even if it does not rise to the level of a criminal offence,” police said.

In March 2022, a Statistics Canada report showed that the Peterborough area had the highest rates of police-reported hate crimes among census metropolitan areas (CMAs) in 2020.